What do a trustee board and a company board have in common and why is this important?

It is highly unlikely that you would you take on the responsibilities of being a company director without understanding what you are letting yourself in for.

Being a trustee is a serious role for serious people with serious responsibilities (although CBC aim to make this interesting and as much fun as you can have sitting down).

The similarities between trustee responsibilities and company director are very close.

Company directors have to act within the powers granted in the Articles of Association and trustees in accordance with the scheme Trust deed. Both have to exercise reasonable care, skill and diligence and have fiduciary responsibilities, file returns to TPR and Companies House.

Whilst a pension trustee is not running a scheme to make a profit, in many other ways the responsibilities of a trustee mirror those of a company director. The table below demonstrates just how much company directors and trustees have in common. 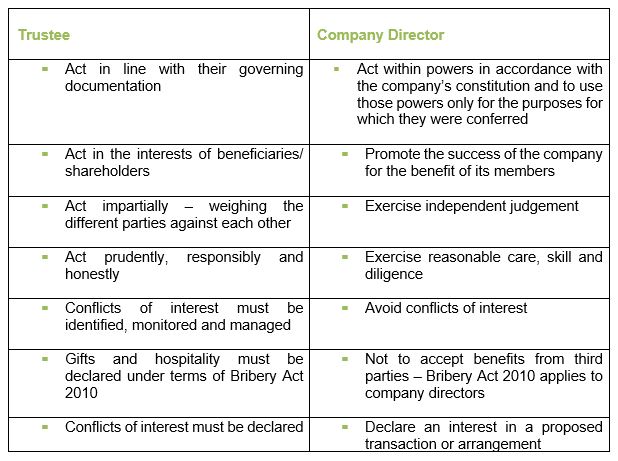 What are the penalties you face if you get it wrong?

Like a company director you can be disqualified from being allowed to act as a trustee, you can be fined and even receive a criminal conviction.

The sorts of things that could land you in hot water include:

As an example, Link Pension Trustees Limited was fined £73,750 by TPR’s independent Determinations Panel (DP) for: failing to obtain audited accounts for the scheme for four consecutive years; failing to provide members with Statutory Money Purchase Illustrations (SMPI) for two consecutive years; and failing to report those six breaches of law to TPR.

It means more transparency with relevant information delivered in a timely manner and that the sanctions for failing to meet their regulations will be more stringent and costly.

For sure, it means that trustees who fail to meet the expectations of The Pensions Regulator will suffer the consequences of their (in)actions.

Many companies have non-executive directors who add experience, knowledge, have faced specific issues relating to the company and act as a critical friend when necessary.

Why then would a trustee board not consider having a professional trustee who would act in the same way as a Non Exec Director, sharing knowledge and experience from a wide range of schemes? And help protect a trustee board from the regulatory requirements of TPR.

In the foreword of the ‘Future of trusteeship and governance’ document TPR states ‘Having a professional trustee on every board may also help to drive up standards of governance and administration in areas we are concerned about’.

No trustee, professional or otherwise, can prevent a sponsor from bankruptcy. That said, an experienced professional trustee can help the trustees look beyond the obvious and take steps to protect the scheme, and the members, before the problem arises.

Like a well-run company board, a trustee board can avoid the same pitfalls by ensuring it remains aware of its obligations and performs to the same challenging standards.

If you’d like to know how a professional trustee could help your scheme,

please give us a call.

Download the pros & cons of using a professional trustee

You have Successfully Subscribed!